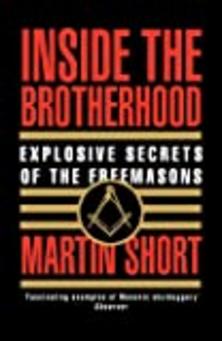 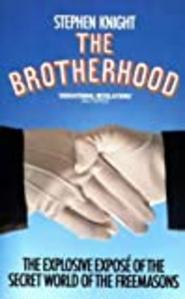 "We Must Be Cautious"

Obi-Wan:
Mos Eisley spaceport. You will never find a more wretched hive of scum and villainy. We must be cautious.

Using the well used Freemason Term
"We Must Be Caucious"..
to deal with things. . .
Ha ha ha...
The best .. quite well balanced and well researched books .. ever written on Freemasonary are
The Brotherhood"
By Stephen Night
And
Inside The Brotherhood.
By Martin Short

https://www.amazon.co.uk/Brotherhood-Stephen-Knight/dp/0007246293
Martin Short's book is in effect a sequel to Stephen Night's book "The Brotherhood"...
Stephen Night died in July 1985 ... aged 33 years old ... just 18 months after the publication of his best selling, controversial expose of Freemasonary ... " The Brotherhood".
Martin Short states ...
".. that had Stephen Knight lived he would have written a sequel .. instead ... I stepped ... almost literally .. into a dead man's shoes ... I tracked down many of Stephen Knights souces ... and read hundreds of letters sent in response to his book ... which he never published because of his illness ... more than three years after his death fan mail still pours in for him from all over the world.. some questions I wanted to try and find an answer for included...
Why do over 500,000 men in the British Isles and another over five million around the world ....up to 100 nights a year pursuing its mysteries ....?
Why do husbands joyfully don an apron at a Freemason Lodge when they would not be seen dead in one at home?
What compels males of almost every social class to dress up in white gloves, chains and jewels, to utter bloodcurdling oaths, and to enact ritual murder and resurrection?
What seening religiosity attracts these fellow inside a Masonic 'Temple' when most of them rarely  (if ever) ... show up to a church?
Are their cemonies of God - and if so, which God?
Or are they of the devil?
There are no easy answers,  for the Freemason Lodge is all things to all Freemasons.
It can be a place of good fellowship and 'brotherly love' but may be riddled with malice and ill-will.
It can be dedicated to charity and benign mutual aid or exploited for career advancement and financial gain.
It may help 'Freemason Outsiders' or work against them.
It can be a serious drain on the resources of one Freemason but a source of great profit for another.
A Freemason Brother can pursue his 'Craft' selflessly or for crooked and corrupt ends of any kind...
Freemasonry can be a conservative, or reactionary force in politics ... or a cover for revolution ... from left to right...
In general Masons are no better or worse beings than non-masons. ...Yet becayse Freemasonry claims above all to be a 'system of morality' it lays itself open to justifiable attack when well-published events show Freemason Members acting corruptly. These events reinforcd suspicions widely held among 'Non-Masons' about incidents they have observed but never fathomed: crimes condoned or unpunished: favours granted or withheld: the inept promoted, the able destroyed: the offending parent awarded custody: the corrupt deal which costs the company or the rateppayer or the taxpayer a fortune..."
I had to laugh when I was Santa Clause in Christmas Grotto in 'The Square Shopping Centre' a few years ago...
The name 'The Square Shopping Centre' is a dead giveaway sign that those that built and named this shopping centre were Freemason Brothers... because 'the Building Square' and 'the Building Level'  are sone of the most important Freemsonry symbols... when a man meets another man he has never met before ... and the man wants to try and find out if this other man is a Freemason ... he will ask questions such as:
Are you on the Square?
Or
Are you on the Level?
For fairly obvious reasons I quickly realised that the extremely lucrative arrangement handed on a silver platter to the marketing company 'Think  and Blink' for the Square Shopping Centre to provide an empty shop free of rent to run the Christmas Groto ... was owned by a couple well connected with Freemasonry...
They liked by personality and friendlyness ... but more than that they liked my real long grey hair and beard...as being perfect to be Santa Claus..
I was chosen instead of an experienced professional  Santa Claus they also hired for a second Christmas grotto to handle seeing 10,000 plus children over 4 weeks leading  up to Christmas Day ..
To give a special present to ' a very special client's grandchild ... who was the head of €100 billion Euro Irish Government backed semi-government organisation that was set up to bail out big property developers who had run into financial problems in a large property development ...
The man who was in his late 60's came into the Chistmas Grotto in company with his quite posh English Daughter and his grandchild...
I successfully entertained the man's grandchild ... and had him laughing and giggling for the 15 odd minutes he was with me in the Christmas Grotto...
The man the whole time stood quietly in the back corner of the Christmas Grotto...
Then as they were all leaving the grandfather came over to me and shook my hand with his long white gloves... with his handshake making me feel this man has a lot of power and infuence...
I knew straight away the man was a senior high level Freemason ..
".. no man today in the year 2016 wears long pristine white gloves ...except a Freemason... he was was obviously on the way to a Freemason Lodge Meeting or had just attended one...'
The man had no idea when he shook my hand that up in the staff locker room were books I had written exposing many wrongs done to me and my family..